Beyond their usual suite of financial services, the credit co-operative has been providing marriage loans to couples in need since 2017. To date, more than 100 members from the co-op have benefitted from it.

Mr Firdaus Suhaimi first met his wife through his friends. The year was 2018 and he was at Downtown East. Following a nudge from their friends, the duo introduced themselves and the rest was history.

Fast forward today, the duo has since tied the knot. Like many couples, planning their own wedding ceremonies can be daunting and pricey.

From solemnisation ceremonies to the actual banquets, from the dowry to the additional bridal package, an average wedding in Singapore can set couples back by at least $30,000 to $50,000, depending on how lavishly planned the ceremony is. A simple wedding ceremony may go up to a few thousands.

Taken aback by the cost of hosting a wedding ceremony in Singapore, Mr Firdaus, who was not financially well to do back in 2019 then, reached out to his father. “When I first reached out to TCC Credit Co-op, under my father’s behest, I was struggling financially,” he says.

To help members prepare for their big day, the credit co-operative offers flexible and affordable marriage loans for couples in need. The couples, however, must be Singaporeans or Singapore Permanent Residents, aged between 21 and 60 years old, and earn a minimum monthly basic salary of $1,200.

Applicants can take up to six times of monthly income. The loan can be used to offset wedding-related expenditures, such as venue rental fees. In Mr Firdaus’ case, he spent on the bigger ticket items such as his wedding photoshoot and venue fees.

Couples will then have to pay the co-operative back over a set period of one to three years, at a flat interest rate of 5% per annum. To date, TCC Credit Co-operative has had benefitted more than 100 members in Singapore since the marriage loan was imposed in 2017. Just last year alone, the co-operative has aided 20 couples tie the knot.

The 24-year-old adds: “I was touched that the staff from TCC Credit Co-op went the extra mile to help me with the loan, as well as helped me take over my outstanding loans with other moneylenders.”

“At the end of the day, I only needed to repay TCC Credit Co-op, which I did. And I have been financially free ever since,” Mr Firdaus says, highlighting how his promotion at work helped him financially too.

Established in 1928, the family-oriented co-operative has been serving its members and providing them with credit when they need it. To date, the not-for-profit credit co-operative offers saving plans and loan services to aid members in different phases of their lives. The marriage loan is one of the newer services provided that help couples tie the knot.  TCC Credit Co-operative will be celebrating its 100th anniversary in 2028.

On what love means to him, Mr Firdaus, who is a romantic, says: “Love, to me, is all about understanding and compromise; my wife and I made it a point to put ourselves in each other’s shoes.” 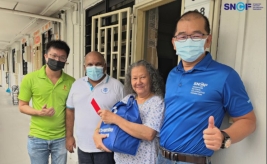 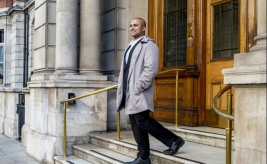 FACES OF CO-OPERATORS: DR DINESH VISVA GUNASEKERAN, A FRONTLINER WITH A VISION
If you haven't already, follow SNCF at Click here to sign up to be a co-operative in Singapore or sign up for our newsletter.
New SNCF Staff Members on their take on volunteering & easing of social restriction
On 9 April and 30 April, SNCF staff members joined SSBEC at their annual Hari Raya events, where they gave away hampers for some residents in the Limbang and Jalan Kukoh estates.
Co-op newsSNCF News
FACES OF CO-OPERATORS: DR DINESH VISVA GUNASEKERAN, A FRONTLINER WITH A VISION
If anything, the Covid-19 pandemic has revolutionised the practice of medicine, including shaking up this fundamental imperative; patients down with Covid-19 are advised to practice self-isolation and home recovery, while telemedicine or teleconsultation have helped offset the workload of hospitals.
Co-op newsInterviewsSNCF News
CO-OPS MAY PROCEED WITH LARGER WORK-RELATED EVENTS AFTER NOTIFYING AUTHORITIES
The Multi-Ministry Taskforce has announced that from 3 January 2022, larger physical work-related events (including general meetings) of between 51 and 1,000 participants will be allowed subject to several conditions including notifying the authorities before the event as well as other Safe Management Measures (‘SMM’) to be complied with.
Co-op newsSNCF News